Tigran Ayunts was born on March 15, 2000 in Yerevan. He started playing football at the age of 6, attending the Mika children's sports school. In 2016 Ayunts moved to Banants FC (now Urartu FC), where he first played in Urartu-2, and then was included in the main team. The 21-year-old midfielder played his first official match for Urartu FC in the 12th round match of the VBET Armenian Premier League against Shirak FC. 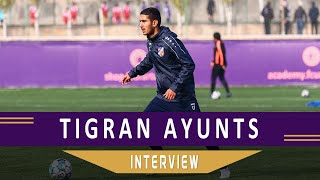