Armen Manucharyan was born on February 3, 1995 in the city of Voronezh, Russia. He started playing football at the age of 11, attending the Banants (now Urartu) children's and youth school.

Manucharyan spent 5 seasons at Pyunik FC, after which he moved to Rotor Volgograd FC, a club playing in the Russian Premier League, where, after spending half a season, he moved to Kazakhstan's Aktobe FC. Manucharyan played 11 matches in this team.

Manucharyan was called up to the Armenian national U-19 and U-21 teams, as well as to the Armenian National team, where he made his debut in a friendly match against Saint Kitts and Nevis in 2017 (5-0), and played his first official match within UEFA Nations League in the match against Liechtenstein (2-1). 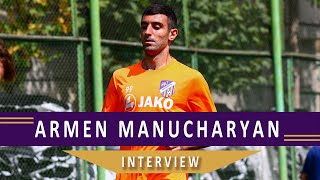